No, not some euphemism for my Little Shop work on Hayling Island, this is more to remind me what the Deer Studios production slate is at this moment.

Whilst the world must wait for the Provincial's chilling horror short Dark Is A Long Way (coming 2016 ... we hope!), the Airninja movie method has been persistently seeing acquisition and edits through to final production.

1. After successfully collaborating with Mark Handley for Pompey Princess, we are now discussing potential for a video for his Christmas single. If it happens it will happen fast and within a couple of weeks.

2. On the theme of Christmas, I shot the interview with Graham Stansfield (famous keyboardist of Rare Bird fame amongst other fascinating things) to support the upcoming release of his new Christmas album release.

3. Earlier this month we had the first production meeting for another Mark Handley video, this one called Bella Ballerina - expected to shoot Jan/Feb 2016. We have great talent and crew lined up, technically elevating the production away from pure airninja-ry but remaining true to the spirit!

4. The next short film by award winning director Chris Jupp. Currently in pre-prod/development. I expect to be recording production sound and edit producing on this show. Likely shooting Q1 2016.

5. A dementia related project, or two. I have one ambitious project in development and another more practical, smaller, project slated to shoot over-night some time this winter. The one may lead to the other.

6. Longer term, the making of a feature length documentary on the work of prolific low-budget film director Michael J. Murphy. I have gathered several new interviews to augment the FilmRaker interview with the late director. This is an ambitious project in terms of cataloguing the material and assembling it into a coherent, comprehensive narrative without alienating Murphy's fanbase - but also allowing it to be accessible to anyone else.

Below is a small tribute video assembled from this last ever recorded interview with Murphy, and screened at his funeral earlier in 2015:

7. Recently completed edit of found-footage for the video to Owen Troman's single Winter Child (presumably another Christmas release). I worked on Owen's previous single in a similar fashion - finding footage and mashing it up into something symbolic for the track.


There are many other side-projects I am involved with but I am on the periphery or only providing services on-demand. Two most notable are both for Trash Arts, schedules TBA. 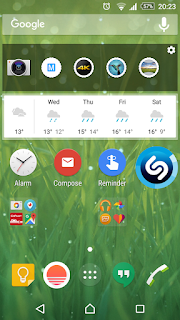 So you may remember I was very disappointed with the direction Apple is taking lately, with its subscription model and general smugness. So I switched to a Sony Xperia Z3+ via a refurb Z2 (still a good value phone I reckon).

It's not that Android is bad. Indeed, I am completely won over by Google services once more and thanks to Google Music I am actively listening and rediscovering my music library once more.

Google Inbox has matured to a point where it just seems normal to me, I've always used my email as a to-do list, so it's perfect(ing). I've been centralising my schedule with (Microsoft's) Sunrise Calendar and not looked back. And Google Keep has since been released for iOS.

So the software that sits on Android is not bad.

Those that know me know that I have virtually zero tolerance for a product flake out in critical working situation.

The Xperia video camera let me down. More than once.

I can workaround the native camera not recording 1080P video for more than 30 minutes, but some things I can't comes to term with:

1. Camera lag. From activation delay to a delay after pressing record, it is not acceptable to me when one of my primary uses for bothering with a smartphone is to have a reliable and robust video camera on me at all times. The Xperia hardware may be robust and reliable but the software has proven to me over the last couple of months that it is neither robust nor reliable.

2. Fixing the exposure. I mean, c'mon. I want to set an exposure and keep it there, please. I didn't realise how important that feature had become to me on iPhone.

3. Third party camera apps that are a bit flakey. Likely because of that F word.

I just don't have time for this shit. I need something that "just works", shit here I am on my knees begging for iPhone to take me back because in my experience it "just works".

So I guess I've learned a lesson here. I love recording live stereo sound, I really love it. However, moreso I love a reliable and robust video camera that records mono. And there always the Shure MV88 and my credit rating before I bankrupt myself with another round of Apple gear and Lightning cables.

Like I say though, Google services have won me over. Android hardware flakiness is to Apple network services flakiness in my experience - frustrating and somewhat second-rate; mediocre.

I'm sitting here with a Fortean taste in my mouth wondering about the nature of reality. About fuses
and bombs. Turkeys and blockbusters- video. Data about data. A recursive tunnel of life until, ultimately, the black veil of death snuffs the individual.

I've just watched Preternatural by Gav C. Steel and Dixon Barker. Or have I? Did I just watch it or was I an unwitting participant?

It's a sharp self-aware pastiche on the found-footage genre with an added twist of lemon - no doubt making it too sharp, too close to the bone, for some.

From breaking the fourth wall as a dramatic device to accenting dialogue with sloppy camera angles reminiscent of lomography, the production values are an un-apologetic punk song.

But this is no musical.

What appears to be wear and magnetic damage on the originating VHS tape runs throughout the film as we follow the exploits of amateur filmmakers Gav and Dixon. Hilarity does not ensue.

The sound design and some graphically striking compositions elevate this well performed tale of malevolence above the average splatterfest. In fact, there is no splatter. Just plenty of chills. Plenty of nested meta.

Why am I writing about a fantasy horror movie on a blog primarily about compact capability? Well it struck me that this movie likely would not have happened so fluidly, or at all, with a union crew of 30 and a video-village in tow.

Similar to Steel's previous feature The Shadow Of Death, this film was shot PSC (that's Portable Single Camera, kids) in a variety of locations that would have hampered large productions with accessibility problems and Winnebagos getting stuck in the mud. Well, except one location - the indie production had to give way at one point to Nick Frost and Chris Hemsworth riding on horseback for Universal Studios filming The Huntsman.

In an odd way, and perhaps this makes me biased, Preternatural reminds me of a cross between my own Crooked Features and the all-improv Halloween spectacular, G.A.I.N. - however, to mere mortals I have no doubt that Preternatural will be a fresh dip into the genre-bender genre.

Recommended for cerebral stimulation in a silent, dark, place.