Pompeywood We Have a Problem 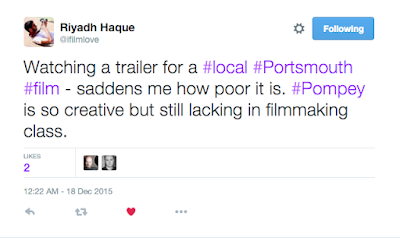 This critique (screenshot above) from multiple international award winning filmmaker Riyadh Haque (who is oft resident in Pompey aka Portsmouth UK) had me slightly concerned that he may be advocating class discrimination within the historically naval city.

I read 'filmmaking class' as members of the filmmaking class, a group of people who would hypothetically set standards by their own decree - essentially an elitist exclusive clique - a monoculture of Hollywood wannabes.

Well, turns out I was incorrect (shocking, I know!)

Twitter misunderstandings, miscommunications aside, the crux of Haque being hacked off with Pompeywood output is class within the context of 'high quality, integrity, status, or style'.


I guess he is being professionally sensitive in not revealing the trailer he was watching, to save us from also being sad about it.

It's also unclear what his benchmark for 'high quality' is, what he considers to have 'integrity', the specific 'status' being described or indeed the 'style' improvements needed.

The current problem, as I see it, is that class in this clarified context is not at all specific - it does not define the problem.

Sure, admission of a problem is the first step - but without a definition purposeful unpresumptuous action isn't particularly possible.

As I write this we are organising a face-to-face meeting at a Pompey venue to discuss further. I want to understand why Haque is so disappointed with Portsmouth's filmmaking class, and perhaps we can thrash out a plan to do something about it.