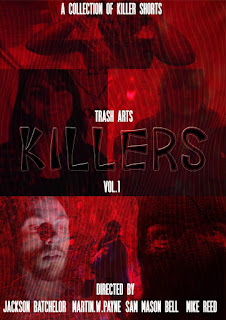 Now here's a twisted leftfield deeply disturbing absurdist collection of short films if I ever saw one. From the Trash Arts production stable and currently streaming on VersusMedia this macabre anthology explores themes from the masked corners of the human mind and will put cracks in the thin veneer of our outdated industrialised society.

Running at just over an hour it demonstrates just what is possible with a camera, a co-operative, and unbound imagination. This is not your multiplex 12A spandex CGI fest, obviously; rather grass roots risk taking fringe filmmakers with a self to express unhindered and (quite possibly) unhinged.

First up is Angel of Decay - essentially a vlog by a Ted Bundy fangirl documenting her slide into mimicry of her hero and beyond. If you ever want to know what to pack in your murder kit, this is the one to watch. Certainly lives up to the Killers moniker, plural.

After a brief insert of a plastic doll autopsy (which continues to be intercut throughout the first few shorts) we have Court of Conscience. If you've ever wondered if the soapbox loons foretelling end-times and apocalypse should be respected then this film has your answer. A simple idea, well, executed.

Then we have Arrows with a one-shot slow-cinema opening scene and an implied botched heist before we see our protagonist casual and confident strolling through the woods licking revolvers as you do. We find ourselves a masked antagonist and after a quick chase sequence the score is settled with a game of chance - namely Russian roulette. There's probably a deep multi-layered metaphor in there somewhere.

Moving on to Here's Johnny we are left to imagine the circumstances and context of any storyline as this short jumps straight into the staple horror shower scene. Next time you're in the shower you might want to keep your wits about you and your clothes on.

Submitting to Desire we are presented with what is probably the most visually striking film of the bunch. Its abstract narrative arc is left to your own interpretation and anything unsettling is down to your own cognitive biases. Featuring blue steak, squished fruit, bondage, and music steadily building to a thrashing climax there's clues and cues to tie it all together into a coherent study of that suggested by the title.

Making you even more wary of the landline telephone, The Call sets a scene of a big local news story - so why does our protagonist keep getting calls from a double-glazing salesman questioning her sanity? A tale of ratcheting guilt until pushed over the edge.

A great use of available light in Southbank which documents the last minutes of life of the main character with a cameo from none other than Death - well this is Trash Arts Killers after all. With an emotive use of music we are in the moment with the lead with disregard for whatever came before and for whatever may come.

Rounding up we have Attraction which explores a couple's relationship anniversary and psychological fallout when the relationship is not all you want it to be. Do you continue with the relationship or do you break up with unknown consequences.


All in all an entertainment filled hour that should help keep you awake at night! Trash Arts Killers Volume 1 is streaming on VersusMedia from 26th January 2018.

Full disclosure: the ASMR Dolls sections are submissions from my own productions at ASMR.Show
Post by miker at 1:00 am