Since the Film Shed site is still down at time of writing, here is the full interview reproduced below: 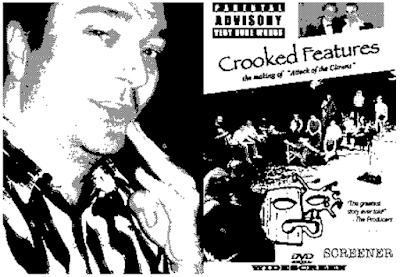 Jordan Brown: Mike, Tell us a bit about your film - Crooked Features.

Mike Peter Reed: Crooked Features has been through many iterations, ideas and concepts. But it's fundamentally always been about getting films made that wouldn't normally get made - and the pitfalls along the way. Now, you may think that's what the various funding bodies are for; but if I couldn't get my science fiction short Ad Astra funded (now available for free as an 'open source' movie), what hope did I have as a first-time director trying to get a feature funded? I've always felt my work falls inbetween 'mainstream' and 'avante- garde' and therefore is neither a safe bet for the public at large, nor for the arthouse crowd.

Fast forward a few years, and a few changes in personal circumstances and I'm just itching to get something feature length story made and brought to market, as an educational exercise as much as anything else. Older, wiser, and with a better credit rating, it seems I might actually be able to get something out the door. If only I had a script I was happy with. So Crooked Features was born, stealing the best bits of the previous incarnations. But what I really ended up with was a treatment and a few character outlines - not the 120 page screenplay that I needed. As luck would have it this is when I became re- acquainted with Kevin Turrell who was looking for a project to flex his writing muscle on and, ultimately, produce. I'd previously met Kevin a few times through a mutual friend, the most memorable being for a screening of The Phantom Menace. We both dislike that movie, but only because we love Star Wars so much. And so Kevin essentially penned the screenplay from characters and situations I had created.

Oh, you wanted a synopsis of the movie...

JB: I was laughing throughout the film. Was difficult for you and Kevin Turrell to come up with a consistently funny script?

MPR: Well, it's certainly good to hear that we raised some laughs. There's always a fear when writing comedy that what you write won't translate to the screen. From what I remember, Kevin came up with the majority of the detail of the gags whilst I concerned myself mostly with the concepts. We also ping- ponged the script a good few times and story and dialogue edited between us. It was probably more hard work than difficult, trying not to contrive the comedy to the point of absolute farce. It was always in my brief that I wanted to make this an almost believable documentary, at least during the initial drafts. I suppose sometimes it was difficult to agree on what would be funny, whether a specific phrase or word made something funnier and exactly what the boundaries of our taste would be. Those disagreements are what created the work. But, hopefully, they created a more rounded comedy.

MPR: I was certainly aware that Blair Witch proved that audiences were prepared to tolerate content over style, so long as the style was an integral part of the decision making process and not an excuse for lousy production values. In terms of tone I drew inspiration from Rob Reiner's This Is Spinal Tap (of course) but also some lesser known works like Weird Al's UHF and Mike Jittlov's Wizard of Speed and Time. I think Tom DiCillo's Living in Oblivion probably had an influence too. Also the numerous 'making of' documentaries that I've seen over the years and books like Skywalking by Dale Pollock which is a Lucas biography. As to the porn aspect, Kevin tells me that interviews with the likes of Jenna Jameson and Grandpa Dave helped with the realisation of the script.

JB: Was your choice to make a mockumentary a result of a low budget?

MPR: Absolutely. I've had previous experiences of working with non-professional crew and so it was my intent to crew Crooked Features with professionals. We soon realised that it was going to be difficult to get a full professional crew together locally who would work for deferred payment (which always turns into a risk of basically working for free). So to keep costs as low as possible we made the decision early on that we'd shoot PSC (Portable Single Camera). We also held the
auditions locally, the theory being that if someone thought the project was interesting enough to travel out of London for an audition then there was a good chance they would be committed enough to turn up for the first day of shooting. Most of our costs went on putting our actors up in a B&B and making sure everyone was well fed. We did briefly consider moving the production to London, however I felt quite strongly that shooting locally would allow us to exploit local landmarks, like the Tricorn (now demolished, so we've recorded a piece of history in that opening shot), Staunton Park and the D-Day museum.

JB: Is there anything that you'd change if you had a bigger budget?

MPR: Ha ha, plenty! For starters I'd have employed a professional camera operator and sound recordist. And an experienced 1st AD. I think the direction suffered a little because of the PSC format, essentially me directing and crewing. But hey, I've seen plenty of documentaries made in this way and so that is why I gave specific directions to the actors that if something went wrong, or they forgot a line or whatever, just wing it and see where we end up. We shot to an insane schedule, I think we were doing between 10 and 20 setups a day over 10 days. Still, this kept the energy going, and the pace was such that on many days we actually finished ahead of schedule.

So with more money I think I would have afforded the 'luxury' of a longer shooting schedule. I'd largely keep the cast the same, the relative unknown-ness of their faces is a positive attribute for the project and they all put a great effort into their performances (even those who ended up on the cutting room floor). I guess they would've appreciated Equity rates for their work. It might've been nice to have a dedicated art director on-board too, to take care of some of our wardrobe and set dressing challenges which may or may not be apparent in the final product (I suspect they are). Of course, I'm forgetting that scriptwriters, producers and directors shouldn't be expected to work for free either.

JB: The cast gave hilarious performances. Where did you get them and do you feel they did justice to the script?

MPR: From what I recall, it was a combination of a shout in PCR, Shooting People and CastNet. Considering the nature and conditions of the production I think everyone did really well and I'm hoping everyone who watches will have a different 'favourite' character to the next person.

JB: Did you base the character of Rod Shuffler on anyone in particular?

MPR: Hmmm, he's a real mixture and was of course further coloured by Kevin's writing. When we put the casting call out we asked for 'an eighties-style pop video director' - a kind of Godley&Creme wannabe but without the talent was what I had in mind, but with all the high-concept extravagance from that era. If he's based on anyone he's based on the filmmaker I hope I never become - blinkered and self-deluded.


JB: I noticed that you included a character called Candy Suxx. Is this a reference to Grand Theft Auto: Vice City? Are you a fan of the game or was the name a huge coincidence?

MPR: I spoke to Kevin about this, since I never made the connection. He tells me he was playing GTA whilst we were writing, so make of that what you will. I think Kevin's dropped in a lot of references that only he knows about.

JB: So what's next for you and your company, HARP 28? I see that Crooked Features is being shown in the eND oF tHE pIER fESTIVAL...

MPR: Well right now I'm concentrating on submitting to pretty much any festival that accepts DVD as a screening format. I think it's always going to be difficult with a movie that so overtly lampoons the industry and personalities that can be found therein. But I hope it's not just viewed as a movie for disenfranchised moviemakers, but is accessible to the public at large (profanity not withstanding - but we'll let any potential distributor decide if they want to bring out the bleeper).

I'm also brewing another low-budget idea, taking a road movie format and exploring Chi Xi
Stigma, more popularly known as the meaning of the number of the beast (not a comedy). We've also got material for a superhero pastiche for anyone suffering from too much spandex in their life which would likely make a good TV series.

I still have to get Helldesk out of my system which I would liken to the IT department run by Basil Fawlty, that would be another TV series right there. Then there's my space opera film franchise tentatively entitled Saga City and I know for a fact Kevin has another dozen screenplays we consider marketable to the right people.

My philosophy is much like Disney's - making movies to make more movies.

JB: Finally, do you have anything to say to new filmakers looking to direct a feature length film? Any advice on getting it funded?

MPR: Well, anything feature length is going to take a lot out of your life. What I'm finding is that, even though we have a finished film there's still plenty of work to do 12 months later. And some of that still costs money. The best way to get your feature funded is to be dating the son or daughter of a billionaire. If that doesn't work then you may as well be playing the lottery as well as applying to the various funding bodies. The main thing is persistence and tenacity. I'd like to say you need talent but that's secondary if you give up too easily. Don't forget your thick skin either. And make damned sure you believe in the script. The idea and writing is the bit that has nominal actual real-world cost so you can afford to spend time on it.