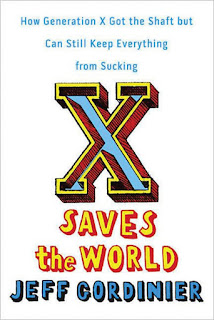 This book, published in 2008, has an obvious axe to grind with the demographics known as boomers and millennials (aka Generation Y) which is evidenced by the subtitle alone. However don't be fooled by the author's sharp tongue and self-entitled sense or irony. Falling into the Generation X demo myself there's a lot I related to, and this book really is a call to action to put the culture back into pop culture.

The basic premise is that being sandwiched between the boomers (currently 'in control') and the millennials (will be in control in future) that X is the 'lost' generation, akin to Prince Charles - his situation is likely to see the throne bypass him and go straight to his children. The book hypothesises that the boomers, living longer, continue to have great influence on the media and knowingly or otherwise are curating monocultural mass media (American Idol was singled out a lot). The net result being a docile millennial generation who would rather download a pop song in protest than take to the streets in peaceful marches.

To conclude the book suggests that in order to stop the world sucking, X-ers must "dare". In a way, that is something I took onboard a long time ago - consciously step outside of your comfort zone, speak your mind (or broadcast it), action over inaction - do something to change something even if you may look foolish.

Personally I did find the book an entertaining read for the most part, although being from the UK it does make me wince that, yes, the book does not acknowledge much of a world outside of the USA (even though the author recounts stories of global travel) - it may even be a thinly disguised advert for the author's involvement in the 'Poetry Bus' which has a chapter dedicated to it. Perhaps that's just the post-modern irony again. I also know from other research I've done that the kind of 'problem' discussed in the book is not new: for example the Romans had the exact same concerns 2000 years ago. So from that perspective the book takes a very narrow view - well, to appeal to the X demographic I suppose!

Quotes from the book:

"Somebody seems to have forgotten to put together the cover stories about Generation X turning forty."

"The media refers to anyone aged thirteen to thirty-nine as X-ers. Which is only further proof that marketers and journalists never understood that X is a term that defines not a chronological age but a way of looking at the world." - Douglas Coupland, 1995

"Nothing is more powerful than ice cream."

"The author and editor Thomas Frank has written extensively about the 'commodification of dissent'."

"Sometimes the best way to make people care about money is to give them some."

"The dot-com boom reached out a gloved hand and said: Luke, I am your father."

"Vast numbers of Generation X-ers learned all their moral lessons from a single source: the 1971 film version of Willy Wonka & the Chocolate Factory."

"This is something I learned from India: When you build something that is beautiful, the community maintains it. People will have pride in where they're living. If you give someone crap, they're going to treat it like crap." - Architecture for Humanity (Kate Stohr or Cameron Sinclair - attribution unclear).
Post by miker at 3:10 pm